PLEASE BE AWARE: This data base is for the TRAVERSE CITY store only. Not every searchable book on this site is in our store's physical inventory. Please check the book's availability line for verification.

Gangsters Up North by Robert Knapp

Robert Knapp was born and raised in the central Michigan area. During a thirty-year career at the University of California, Berkeley, he published extensively on topics in ancient history including, most recently, Invisible Romans and Dawn of Christianity. In retirement his interests turned also to the local history of Clare, Michigan, where he is restoring the log home built by his pioneering great-grandfather. His previous books include Small-town Citizen Minion of the Mob-Sam Garfield's Two Lives-The Purple Gang Meyer Lansky and Life in Clare Michigan (2018), Mystery Man-Gangsters, Oil, and Murder in Michigan (2014) and Clare, 1865-1940 (Arcadia Images of America series) (2012). Praise for his work abounds. 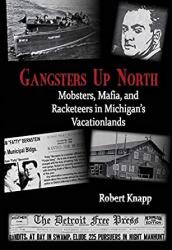 There are no products in your shopping cart.

See if your favorite author is coming!